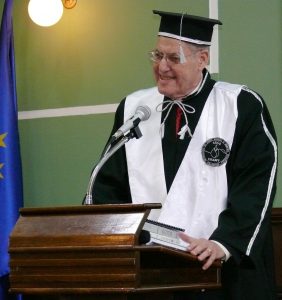 Jules JANICK is well known in the horticultural and breeding community as founder and editor of Horticultural Reviews (34 volumes) and Plant Breeding Reviews (30 volumes) which have become sourcebooks of technical information in both fields. He has also edited six Proceedings of New Crops Conferences which are available on his website www.hort.purdue.edu/newcrop that received over 31 million hits in 2006 and represents a unique source of information for workers in new crops and germplasm. In addition Janick has coedited a number of monographs in fruit breeding. His textbook Horticultural Science (4 editions) was translated into Portuguese during Janick’s tenure at the University of Minas Gerais (now Federal university of Viçosa) from 1963-1965) and is well know to an older generation of Brazilian horticulturists. Janick served as President of the American Society for Horticultural Science and was a long time editor of the Journal of the American Society for Horticultural Science and HortScience as well as Editor-in-Chief of ASHS Press. He now serves as Science Editor of Chronica Horticulturae, a publication of the International Society for Horticultural Science where Janick serves as board member and Director of Publications. Altogether, Janick has written or coauthored over 100 volumes.

Janick has published a great many papers in horticulture, genetics and breeding, and tissue culture.

His varied research career has involved studies on somatic embryogenesis, synthetic seed, spinach sex determination, and Artemisia as a source of artemisisin. His latest interest has been the relationship of horticulture and art especially art as a source of information on horticultural technology and history.

Janick’s long career has been associated with the Department of Horticulture and Landscape Architecture at Purdue University and he has been employed since 1952 and still works full time. He is now the James Troop Distinguished Professor of Horticulture and is Director of the Purdue University Center of New Crops and Plant Products. Janick has worked with germplasm and was involved with exchange of Eruca and Diplotaxus germplasm in Italy while he held a Fullbright Fellowhip at the University of Sant’Ana in Pisa in 2004.

Janick has traveled widely throughout the world and has received honorary degrees at the Hebrew University of Jerusalem (2007), the Technical University of Lisbon (1994), and the University of Bologna (1990). Janick received his BS from Cornell University (1951) and MS (1952) and PhD (1954) degrees from Purdue University. Janick’s career is one of passionate involvement with horticulture, plant breeding, and the history of horticulture.

Professor Janick was elected to the Hall of Fame of the American Society of Horticultural Science.

He is Doctor Honoris Causa of the University of Agricultural Sciences and Veterinary Medicine Cluj-Napoca.

Following the proposal of the Academic Council of Faculty of Horticulture, the Senate of University of Agricultural Sciences and Veterinary Medicine Cluj-Napoca decided to grant honorific title Doctor Honoris Causa to Professor Jules JANICK, a recognised leading figure of the worldwide horticulture.

On September 30, 2010, we attended on these award festivities and we enjoyed for the celebration of a true titan of the world horticultural sciences. You can find information about this special moment in  the Editorial ‘Tribute to a Leading Personality of World Horticultural Science‘ published in Notulae Botanicae Horti Agrobotanici Cluj-Napoca journal.

On this occasion, Professor Jules JANICK presented a general lecture in a plenary session of the 9th International Symposium “Prospects for the 3rd Millennium Agriculture”, entitled ‘Art as a Source of Information on Horticultural Technology’, published in ‘Bulletin of University of Agricultural Sciences and Veterinary Medicine Cluj-Napoca. Horticulture’.

No events to show